Cycling is about motion, and leads to two general questions. to ask. How do cycles move when acted upon by external forces, and move in the absence of external forces. This latter question is called inertial motion, and as simple as it may sound,  it was misunderstood for nearly fifteen hundred years.

Early concepts of motion were articulated by the Greek philosopher Aristotle around 335 – 322 B. C. .  He believed insights came from observation and thinking, rather than measurement. He not only got it wrong, but set science on the wrong path for over 1500 years.

He watched objects rolling along and eventually coming to a stop, and concluded their natural tendency was to be at rest. His “thinking” did not perceive there might be forces acting to bring the object to rest.

For him, an object remained in motion only as long as its impetus continued to act on it.  An object in moti on with nothing acting on it, had a quantity that continued its motion until it was used up and then stop. While cannons were not available in Greek times, he would have expected projectiles to move something like this.

While scattered writings disputed Aristotle’s concepts, it was the publication in 1687 of Sir Isaac’s Newton’s Philosophiae Naturalis Principia Mathematica (“Mathematical Principles of Natural Philosophy”),  that a scientifically accurate basis for analyzing motion appeared. It established what is known today as the Scientific Method incorporating Mathematics and experimentation.

Newtonian mechanics attributed a property to objects with mass called Inertia. Unlike Aristotle’s concept, it was not something “consumed” by motion, but rather it was simply the natural motion of an object in the absence of forces. Objects slowed down because of resistive forces, not because some internal property of the object had been expended.

Because objects moved inertially, they did not move in straight lines until they “ran out of gas” and then drop. They followed parabolic curves which suggested motion was influenced by external forces. What is Inertial Motion?

Inertial Motion describes how objects move in the absence of  external forces. For a coasting cyclist, it is the CyclistCycle inertial motion that keeps it moving even though the cyclist is not pedaling.

Newton described Inertial Motion by saying in the absence of forces, an object either remains at rest or moves in straightline motion at constant speed. An object only deviates from its inertial motion when forces are “forcing” it to deviate.

Here is the simplest example of Cycling Inertial Motion. Your cycle is in the garage and you are watching TV. The only way your cycle will be in motion is if someone is stealing it.

Now suppose you are moving along at some speed and all resistive forces disappeared. What would happen? Things would get boring quickly. You would continue on in a straight line at your current speed forever. The only reason in this case that you would slow down and stop is because of the external force of rolling resistance.

One other example of cycling inertial motion is turning. Your cycle wants to continue moving in a straightline and so you are “forcing” it to not. The result of this battle with inertial motion is that the cyclist must lean into the curve to keep from having their inertial motion pull them towards their original path thereby causing them to loose their balance.

Inertial Motion is fundamental to how we move whether we are cycling or doing something else. When I was in graduate school, I used sports to teach Physics, including coaching the Diving Team. This is a  Greg Loganis taking some last dives from the Marguerite Aquatic Center tower in Mission Viejo prior to it being torn down. 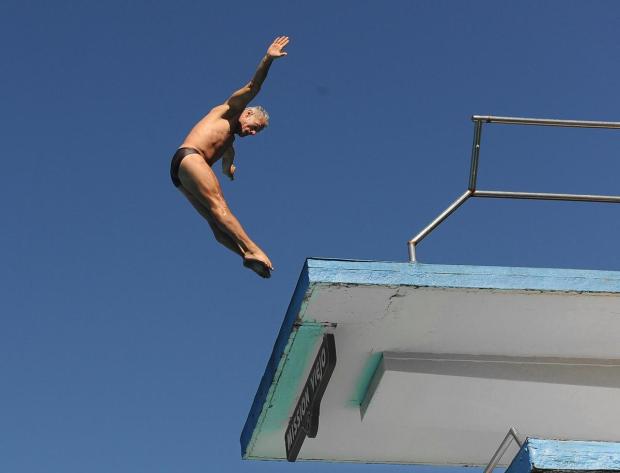 Here is the inertia motion question. Is Greg going to hit his head on the platform? Is it luck, or does he know something? He does.

As his feet left the platform, Greg’s pushed away with just enough force to set his body in inertial motion away from the platform.

By controlling how much inertial motion he had as his feet left, Greg controls how far away he is when he clears the platform.  Again, this demonstrates how inertial motion is a fundamental property of how objects move.

Next Topic:   Newton’s Laws of Motion